Page 1 of the Register of the Royal Red Cross

The QARANC Association has been researching the recipients who appear on page 1 of the Register of the Royal Red Cross. The first page lists 16 recipients with “The Queen” being added to the top of the list of names. The first 16 are:

1. The Princess of Wales

The Princess of Wales at this time was Alexandra of Denmark who married Queen Victoria’s son Albert Edward (Bertie) in 1863. Her mother Louise was Queen of Denmark and had a great interest in the care of the sick. Queen Louise’s most known project, and one which she herself referred to as her most important, was the Diakonissestiftelsen (The Deaconess Foundation) in 1863, which introduced the Deaconess profession in Denmark. The Deaconesses were the forerunners of the Danish nursing profession.

2. The Crown Princess of Germany

The Crown Princess of Germany was Victoria, Princess Royal, the eldest child of Queen Victoria and Price Albert. Victoria was married at age 17 to Prince Frederick of Prussia, with whom she had eight children.

3. The Princess Christian of Schleswig Holstein

Princess Christian was Helena, the third child of Queen Victoria and Price Albert. Helena married Prince Christian of Schleswig-Holstein. Helena was the most active member of the royal family, carrying out an extensive programme of royal engagements. She was also an active patron of charities, and was one of the founding members of the British Red Cross. She was founding president of the Royal School of Needlework, and president of the Workhouse Infirmary Nursing Association and the Royal British Nurses’ Association. As president of the latter, she was a strong supporter of nurse registration against the advice of Florence Nightingale. She took great interest in Army nursing, especially during the Boer War (1899-1902). The Army nursing reserve was named Princess Christian’s Army Nursing Service (Reserve), and in South Africa there was a Princess Christian’s Ambulance Train, and a Princess Christian’s Hospital.

Princess Beatrice was the fifth daughter and youngest child of Queen Victoria and Prince Albert.

5. The Duchess of Connaught

Princess Luise Margarete of Prussia was a member of the House of Hohenzollern. She married Prince Arthur, Duke of Connaught and Strathearn, who was the seventh child of Queen Victoria and Prince Albert. Her name was Anglicised as Louise Margaret. The maternity hospital adjacent to the Cambridge Military Hospital at Aldershot was named in her honour as the Louise Margaret Maternity Hospital.

6. The Duchess of Teck 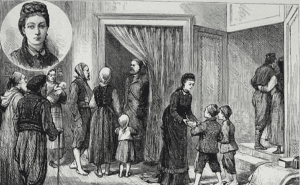 Lady Strangford was a British illustrator, writer and nurse. There are streets named after her and permanent museum exhibits about her in Bulgaria. She established hospitals and mills to assist the Bulgarians following the April Uprising in 1876 that preceded the re-establishment of Bulgaria. She was awarded the Royal Red Cross  by Queen Victoria for establishing another hospital in Cairo.

Following her husband’s death she volunteered to serve as a nurse in (probably) University College Hospital in London. In 1874 her studies led her to advocate a change in the way that nurses were trained. She published Hospital Training for Ladies: an Appeal to the Hospital Boards in England. She advocated that nurses should be allowed to train and work part-time. She believed that training to be a nurse would benefit many women in their role within a family.

Lady Wantage was the sole heiress to the fortune of her parents Harriet Wright and Samuel Jones-Loyd, 1st Baron Overstone, who gave her Lockinge House near Wantage as a wedding present when she married Robert Loyd-Lindsay in 1858. She was a benefactor to many causes, most notably nursing, for which she founded the National Aid Society (later the British Red Cross Society)